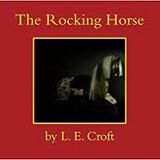 My first Children's Book is available to order- HERE. Please use the contact form stating whether you would like a Dedication or signed copy. This book is available to borrow from the Rye Library or reserve/order from your local Library UK only junior fiction section.
It is called 'THE ROCKING HORSE BY L.E.Croft' and produced in Hardback and paperback (approximately 152 pages). It is a traditional, original and a locally based book to Sussex and Kent and priced at £10.99 pence (plus P+P £2.50p UK ) for Hardback and £4.99p (plus P+P at cost) for paperback. I have also produced a free poster to accompany the book (there are 3 to choose from) These are available at a ratio of one poster per book.
Although, It is meant for children, it's for any age, If you are young at heart.
It has taken a good year of my life and I have been working on the production of the whole book from start to finish as I feel children today have no new classics and the tradition of reading, loving and owning a physical book is fading. I was so insistent on quality, size, and look of the book because I wanted to emulate an old feel, and look to the book, as if it was an old book ' just found today'. I also applied that to the story itself. Everybody that has read it so far has loved it. I have been asked for sequels, a film, so who knows!

NEVER REVEALED BEFORE INFORMATION- Since I have never mentioned it here before, I can reveal that my Children's Book is quite a bit more than a Children's Book as it actually doubles as an Adult Compendium of Films/Music! Yes, it does! How? well, although it reads like any normal book, hidden in plain sight are the clues to many well known films and even music/bands. It certainly was apparent to me as I wrote the book, so if you like you could say 'it was a deliberate accident.' A bit like The Beatles Album 'Sgt.Peppers...'. If you already have the book and still do not understand what I mean I will give one example 'The book starts by introducing the character of James Jenkins- as in Jenkins Here =Jenkins Ear a nod to the film That'll be The Day where David Essex's Character also called Jim, so now you have both parts of my character's name, on a bridge quoting 'Jenkin's Ear' But more than that, as he was on a bridge, it is also a nod to Waterloo Bridge and Watership Down. So there you have it! One Clue to three films and many songs/Bands from the Start. All hidden and combined with many more in a Children's Book that is so much more, it is pure magic. How many Films/Music/Bands can you find??? Enjoy!